The Bank of Canada delivered the fifth consecutive interest-rate hike to slow Canada’s economy and drag inflation down. The key rate increased by 0.75 percent, increasing to 3.25 percent. Though showing signs of peaking, inflation is still at an uncomfortable pace, nearly four times the central Bank’s target.

“It will take some time before inflation is back to normal,” the governor said in a newspaper opinion piece on August 16, 2022, after Statistics Canada reported a slight deceleration in headline inflation. “We know our job is not done yet – it won’t be done until inflation gets back to the 2% target.”

With higher mortgage rates, the housing market is pulling back as anticipated, following unsustainable growth during the pandemic. The Bank of Canada continues to expect the economy to moderate in the second half of this year, as global demand weakens and tighter monetary policy in Canada begins to bring demand more in line with supply.

Given the outlook for inflation, the Governing Council still judges that the policy interest rate will need to rise further. I will look for clues on whether another hike will come in October’s rate announcement.

Banks and other financial institutions are expected to raise their prime rate in the coming days, which will increase rates for variable-rate mortgage holders.

Don’t panic! If you feel unsure of what to do next because of this rate announcement and want a review of your mortgage, reach out and let’s chat. I am here to help and have the resources!

Back to the Blog Index

WE LOVE TO HEAR FROM OUR READERS 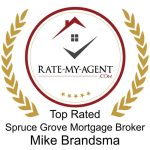